Life is a platter of relationships. But who doesn’t love DESSERT post a delicious meal??  The same way FRIENDSHIP is the dessert relationship of our lives. I am sure everyone will agree that the bond we share with our “YAARS” is the best one amongst all the other relationships we have.

Friendship doesn’t come along with any kind of formalities. This relation only gives us lots and lots of memories to cherish all our lives. Our friends or so-called-IDIOTS are the spice in our lives. They bring up all the excitement that is lacking in our life.

No other medium has portrayed this bond of friendship the way Bollywood has does. Our Hindi cinema has never disappointed us with the movies that have explored friendship in so many ways and have given us some of the best Bollywood movies on friendship.

Due to this lockdown, everyone is surely missing their YAARS and so here I come up with a list of some best Bollywood movies on friendship that have given a new definition to friendship and will surely make you go nostalgic and would make you run to your YAARS post lockdown!!

So here goes the list of best Bollywood movies on friendship that is a definite watch with your yaars.

When talking about the best Bollywood movies on friendship, this film is a cult classic starring Aamir Khan, Saif Ali Khan, and Akshay Khanna in the lead. The directorial debut of Farhan Akhtar made Goa the perfect destination for holidays with friends.

There is a famous saying, that if you happen to fall, your best buddies won’t pick you up until they finish their laughter.

Such is a hilarious scene in the movie when Sameer narrates his unfortunate incident with the girl in Goa who robbed him of everything that made his friends Aakash and Sid laugh like hell before they helped him out to get off the mess just like typical friends would do.

This is a movie depicting many of our lives of how these three friends Aakash, Sameer, and Siddarth part ways after college with their difference in opinions in terms of handling relationships and finally get back together gaining more maturity with the way of tackling life and issues and realizing that whatever happens, ultimately we need our best buddies all through our life.

The movie proved that friendship lasts beyond ties of love and family.

Surely we can’t miss this movie when it comes to the Best Bollywood movies on friendship ever made.

This Rakesh Omprakash Mehra’s film starring Aamir Khan, R. Madhvan, Sharman Joshi, Soha Ali Khan, Siddarth Suryanarayan, and Kunal Kapoor is a movie of a kind that takes a major place in the list of best Bollywood movies on friendship.

This is one of the most memorable movies of all time and stands unique when it comes to discussing the best Bollywood movies on friendship. The movie not only defines friendship but also patriotism. The story has a group of friends where DJ(Aamir Khan), Karan(Siddarth), Ajay( R. Madhvan) are already very old friends and later are joined by Sonia( Soha Ali Khan), Sukhi( Sharman Joshi), and Aslam( Kunal Kapoor) and they make a very dedicated and exciting group of friends.

The movie beautifully represents the fun a group of friends can have at a local Dhaba with each character so relevant to us and defining friendship in every possible way be it the time when Ajay (R. Madhavan) proposes to Sonia ( Soha Ali Khan) the way her friends show up the concern for her in a protective manner or the time when all of them decided to fight against the injustice to Ajay(R. Madhavan) who was a pilot in the Air Force and lost his life to corruption.

The movie handles patriotism in a very subtle way with the awakening of these youngsters who decide to go to any extent even if that meant sacrificing their lives for their friend who became a victim of corruption.

This is a truly iconic film and surely strikes the chord of real friendship and is a must-watch on your Best Bollywood movies on friendship list.

This Rajkumar Hirani directed movie starring Aamir Khan, Sharman Joshi, R. Madhavan, KareenaKapoorKhan, Boman Irani portrays friendship in college days all set in an engineering college in the best possible way. It shows the true friendship that boys develop in college with so much relevance. This movie is historic when it comes to the best Bollywood movies on friendship.

The story has Rancho, Farhan, and Raju who become friends after entering college. The story has so many memorable moments to enjoy and cherish with Aamir Khan as Rancho who is a badass and gave philosophical advice to his friends on how to become successful. The memorable dialogues of Rancho telling, “BACHCHA KABIL BANO, KAAMYABI TOH JHAK MARKE PICHE AAYEGI”, then his advice of being brave and not to fear things by taming the heart with his epic dialogue, ”YE DIL DARPOK HOTA HAI, ISE BEVKOOF BANAKE RAKHNA” by saying the mantra “ALL IZZ WELL”.

The movie shows how true friends try hard to make you understand things in their unique way as Rancho does by changing the Teacher’s day speech from CHAMATKAR to BALATKAR just to explain to Raju what happens when you mug up things without understanding the meaning.

Time and again with so many epic scenes and dialogues the movie adds a lot of meaning to friendship making its place straight in the list of best Bollywood movies on friendship and shows how friends can go up to any extent for you in all your ups and downs.

Ayaan Mukherjee directed the movie Yeh Jawaani Hai Deewani is that perfect movie that gives major friendship goals and takes a rock-solid place in the list of best Bollywood movies on friendship. The characters Bunny (Ranbir Kapoor), Avi( Aditya Roy Kapoor), Aditi( Kalki Koechlin), Naina(Deepika Padukone) are so much us. It feels like we know them so personally.

The story goes with these four friends going on a trip to Shimla which is a full fun trip as dreamt by most friend groups. Moments like, where Avi cancels his trip due to lack of money and Bunny sponsors him and takes him to the trip which is that moment of “ AWW” and makes us value friendship even more.

Just like a regular thing of parting with friends after college and meeting again after months or years with everyone doing his own thing and still not feeling disconnected is what real friendship is all about.

Such is the scene when Bunny and Avi have a fight at Aditi’s wedding as Bunny feels that Avi is jealous of his success but Avi says he has seen all his shows and is very proud of him. That’s the moment that gives you those feels striking the right chord of friendship.

So why wait?? Just go immediately and watch this movie because when it comes to the list of best Bollywood movies on friendship, this movie takes a special place and yes do thank Naina for opening her “YAADON KA DABBA” and giving us such strong emotions for our yaars. 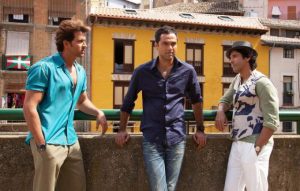 The three boys of the story starring Hrithik Roshan, Abhay Deol, and Farhan Akhtar is a treat to us. Friendship has been reflected in a very sensitive and larger than life way.

The story is of these three childhood friends Imraan, Kabir, and Arjun who go on a trip to Spain to accomplish their childhood pact of going for a bachelorette before Kabir’s marriage.

The movie goes through a beautiful ride of mixed emotions by driving across Spain, whether it is going for a sky diving or going underwaters or scaring random strangers by silly acts and the bull race.

The vacation in Spain has so much thrill, comedy so many emotions a wonderful opportunity for mending broken friendships, and the pact these friends make to do tasks that they are most scared of to overcome their darkest fears and falling in love all over again knowing what they truly want and deserve in their life.

The way Zoya Akhtar has crafted the movie is so wonderful representing the bond the love the respect the boys have for each other and the scene where Imraan apologizes to Arjun after years for the blunder he did by stealing Arjun’s girlfriend, showed beautifully how an apology straight from the heart could make up for things screwed long back amongst such lovely friendships.

So that’s what real friendship is all about to keep it above everything. That’s what makes our yaars so special and this movie way too special in the list of best Bollywood movies on friendship.

The story is about these two boys Sonu and Titu who are childhood friends and more brothers. Titu losing his mom at a very tender age left him with only Sonu and his family as his own family and everything he could have.

Titu is a very smart and witty guy who takes all responsibilities of taking care of his brother like friend Sonu. When Sonu faces his first breakup and is heartbroken Titu comes all the way leaving his work to take care of Sonu and warns him that his girlfriend is not worth him and to choose finally between him and his girlfriend and Sonu chooses over her.

Again 6 months later when Sonu finally decides to marry the girl chosen by his family Titu with his nature to protect Sonu finds out that the girl Sweety( Nushrat Bharucha) is also very mean and not the one meant for his innocent Titu.

With so many efforts to save his Sonu from Sweety is what this movie is all about and how that one best friend who is more than a sibling takes care of you in every possible way.

Finally, the moment after all efforts in vain when Titu asks Sonu to choose between him and Sweety and Sonu without a second thought said he chooses Titu over her is the perfect moment that gave a blow to a girl like Sweety who thought “DOSTI AND LADKI MEIN JEET TI LADKI HI HAI” and made us all emotional over this bond of friendship between Sonu and Titu.

So without a second thought go watch this movie with the Sonu of your life who will choose you no matter what!!!

Indian movies have given us immense friendship goals over the years. These 6 Best Bollywood movies on friendship are a must watch with your gang. Celebrate friendship with these movies!!